A simple YouTube video on how to scare your wife has become a hit...

Email ThisBlogThis!Share to TwitterShare to FacebookShare to Pinterest
Labels: hit, How to scare my wife, tow, truck, video, YouTube 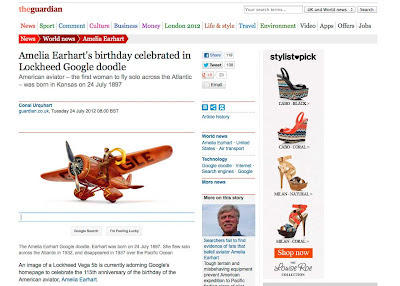 Amelia Earhart, the first woman to fly solo across the Atlantic, was born on this day 115 years ago (July 24, 1897). She flew a Lockheed Vega 5b from Newfoundland, Canada, to Culmore, Northern Ireland, in 1932.

The intrepid pilot disappeared over the Pacific in 1937 while trying to fly around the world. No trace of Amelia, or her aircraft, has ever been found.

A Google doodle was on the company's home page to celebrate her birthday.

Is the Google Nexus 7 by Asus a viable rival to the iPad?

There's a good review of the Nexus 7 here:

Newsreader Sir Alastair Burnet, the frontman on ITN's News at Ten, has died at the age of 84. Andrew Neil, a close friend, said he was "one of the greatest journalists of his generation". 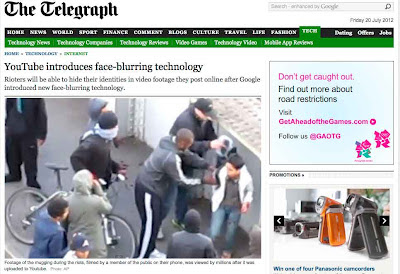 And, according to the Telegraph, it could mean rioters who upload clips could hide their indentities.

Several clips were posted on the site during the London riots last summer, including footage of men robbing Malaysian student Ashraf Rossli when they were pretending to help him. His attackers were identified and jailed.

Google says the technology will help to protect human rights in countries such as Libya and Syria. 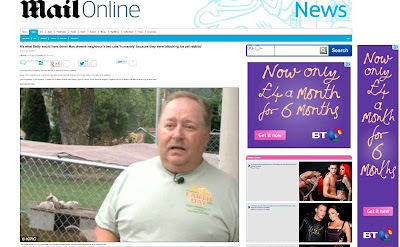 A man drowned two of his neighbours' cats after, he says, they killed 30 of his pet rabbits.

Kevven Tymn, of Winchester, Oregon, USA, says he drowned the cats because it was the most humane way to get rid of them, according to the Mail. ‘You put it in a 55 gallon drum of water, it takes two gulps of water, it’s dead. There’s no suffer there,’ he said.

The Douglas County Sheriff’s Office is investigating the incident.

The BBC has some great footage and a video report on how to land an F-35 fighter as British pilots test-fly the new Joint Strike Fighter at Patuxent River Naval base in Maryland, USA

Wild fires have been sweeping across southern Europe, with people running from their homes in Greece, Spain and Portugal.

VIDEO REPORT FROM THE BBC