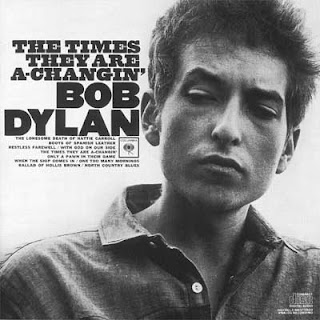 Bob Dylan is to be honoured with America's highest civilian award, says the White House.

Dylan, now 70, will be presented with the Presidential Medal of Freedom in a ceremony next month.

The folk hero was chosen for the award, according to the White House, because of his contribution to American culture and to the civil rights movement of the 1960s. 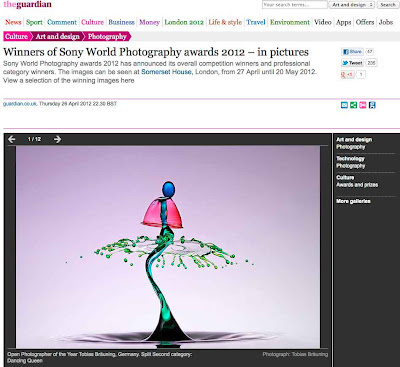 Fantastic pictures in the Sony World Photography awards 2012. The winners have just been announced and the images will go on display at Somerset House, London, from today (April 27, 2012) until May 20, 2012. 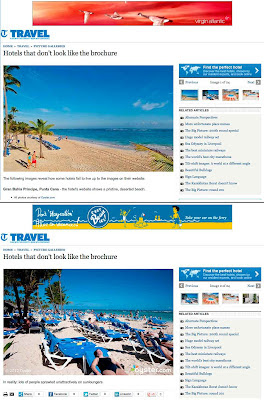 Hotels that do not live up to the promise of their holiday brochures is nothing new. Remember the days when people booked vacations in Spain only to find that their dream destinations were still under construction?

None the less, a revealing series of pictures on the Telegraph website show just how far some hotels will go to paint a pretty picture of themselves...

Email ThisBlogThis!Share to TwitterShare to FacebookShare to Pinterest
Labels: brochures, holiday, holidays, hotels, images, not like brochure or websites, pictures

Amazing video captures the moment a 200-pound black bear fell 15 feet out of a tree at the University of Colorado-Boulder.

The bear had climbed a tree after walking around the halls of residence area and was tranquilised by wildlife experts. 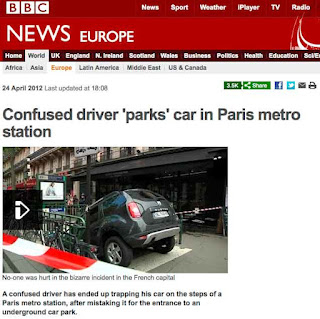 I know that driving around Paris is not for the faint-hearted (it's worse in Rome and tolerable in London), but how on earth do you mistake a Metro station, steps and all, for the entrance to an underground car park?

Well, that's exactly what a 26-year-old driver called Johan did in the French capital and explained his actions to AFP thus: "There's a sign saying 'Haussmann Parking' right in front... I made a mistake".

Johan was tested for alcohol by French police... and passed. 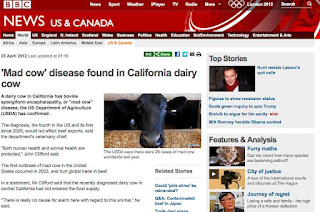 A dairy cow has been found to have 'mad cow disease', bovine spongiform encephalopathy (BSE), in California, USA, according to the BBC. It has been confirmed by the US Department of Agriculture (USDA).

The disease was detected as part of a screening programme.

The USDA's chief vet, John Clifford, said nothing had "entered the food supply". He added: "There is really no cause for alarm here with regard to this animal." 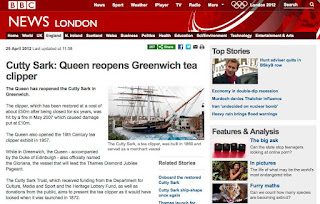 The Cutty Sark has been reopened by the Queen in Greenwich.

The tea clipper has been closed for six years for renovations costing £50 million after a fire.

Her Majesty had opened an exhibition at the 19-century tall ship in 1957.

According to the BBC, the Cutty Sark Trust wants to 'present the tea clipper as it would have looked when it was launched in 1872'.

The Cutty Sark opens to the public on Thursday.

So, time for another look around. 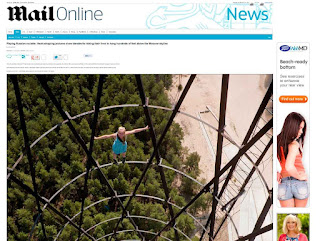 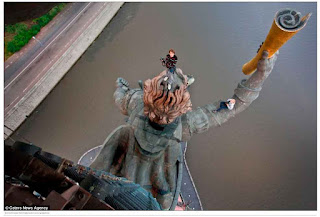 The Mail Online reports on daredevil photographers in Russia who risk their lives to climb public buildings to get amazing pictures.

'Is this the dumbest craze ever?' asks the Mail. Maybe, but photographers have been risking their lives for years to bring us staggering shots.

This sort of photography isn't for me, though... I don't like heights. Even looking at their pictures makes me feel a bit queasy.

Interesting thing about the second picture is that someone had to actually take it. So, where on earth (or off it) was the photographer standing? Twenty unpublished black and white pictures of the Beatles are to go for auction after being found lying around in a family album for nearly 50 years.

They were taken behind the scenes during the filming of 'A hard Day's Night' in 1964.

Taking pictures on the set was banned to stop leaks of new material, but the props manager at Pinewood Studios, Peter Allchorne, was able to walk around with a Kodak Retinette camera.

He thought they were just another band larking about on set and didn't even like their music.

The photos go on sale in Stockport, Cheshire, on May 19.

Reds in the bed? Men prefer women in red - think they'll sleep with them on first date 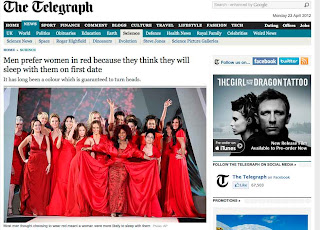 Men prefer women dressed in red, according to a report in the Telegraph, because they think they will sleep with them on the first date.

Scientists studied 120 male students aged 18 to 21 and found that women dressed in red meant a  “greater sexual intent” and were more likely to jump into bed with a man than someone who opted for more neutral colours.

Apparently, the garment worn by these scarlet women doesn't even have to be revealing.

Email ThisBlogThis!Share to TwitterShare to FacebookShare to Pinterest
Labels: dressed in red, jump into bed with them, men prefer women in red, scarlet women 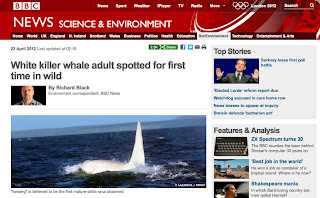 A white killer whale, nicknamed Iceberg, has been spotted off the coast of eastern Russia. It is believed to be the first time an adult white orca has been seen.

Nobody knows why orcas turn completely white, but a captive white animal suffered from a genetic condition that causes partial albinism.

The adult whale spotted in Russia appears to be healthy and leading a normal life. 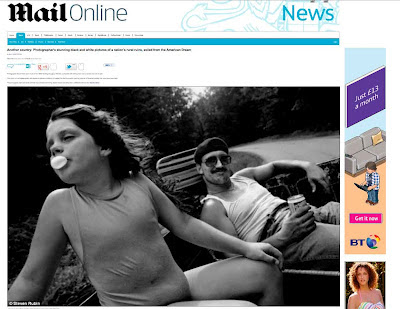 A Los Angeles gallery is to display a large collection of stunning images taken by Steven Rubin as he travelled throughout Maine, USA, in the 1980s with just a camera and a small amount of cash. They show American poverty that many people have never seen before. 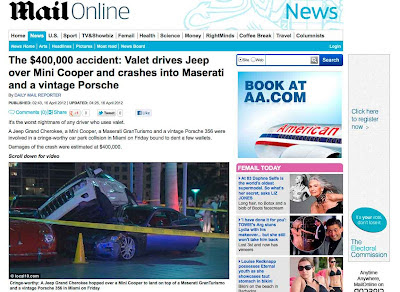 A valet in Miami 'crashed' a Jeep Grand Cherokee over a Mini Cooper and smashed into a Maserati GranTurismo and a vintage Porsche causing an estimated $400,000 damage, according to a report and video at the Mail.

Details are confusing as original reports say the valet drove over the Mini, but local news says the Maserati driver lost control and drove under the SUV. 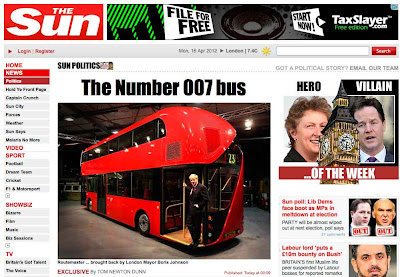 James Bond's car for his next film, Skyfall, will be a big, red London bus, according to the Sun. Scenes being filmed around London involve a new Routemaster, brought back to the streets of the capital by mayor Boris Johnson after the double-deckers were scrapped by previous mayor Ken Livingstone.

The plot of the 007 film, starring Daniel Craig, is a secret, but the bus involves action in Trafalgar Square.

Good publicity for Boris, who hopes to be re-elected on May 3. Read 'monkey business' an extract from Sons of Gentlemen - in the days of the Titanic. The Adventures of Greeny, an apprentice on tall ships 1908 to 1912 by Captain T. B. Greenhalgh, just published for the Kindle. Yes, he was my grandfather!

Greeny, an apprentice on board the four-masted, Standard Oil Company barque 'Brilliant', is in the Java Sea. And he has swapped a pair of old trousers for a Sumatra monkey. There are about a dozen monkeys on board, but he is the only apprentice to own one...

And the monkeys get up to all sorts of tricks.

Sons of Gentlemen is available as an eBook from Amazon.

A huge earthquake of 8.6 magnitude is being reported off the coast of Indonesia's northern Aceh province.

A tsunami has been generated, according to the Pacific Tsunami Warning Centre but the likely impact has yet to be calculated.