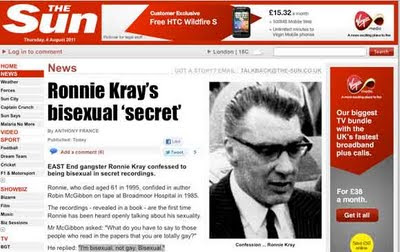 Ronnie Kray, the notorious East End gangster, confessed to an author that he was bisexual, according to a Sun story.

He had kept his sex life secret from his brother Reggie until he was 25.

Ronnie, who died in 1995 aged 61, shot dead George Cornell in a pub in London's East End after being called a "fat poof".

When he was in Broadmoor Hospital, the high-security psychiatric institution, he told author Robin McGibbon: "I'm bisexual, not gay. Bisexual."

THE KRAY TWINS (WIKI): gangsters in the East End of London